The All New R-Cam 1000 XLT Color Video Water Well Inspection System is equipped with two cameras in a single housing, each with a wide-angle lens, for viewing downhole and side view images in water wells or boreholes. Low light level CCD sensors allow the cameras to detect images with minimal lighting power, as low as 1 LUX.

Controlling the R-CAM XLT is easier than ever before with our newly updated R-CAM XLT control unit. Survey The R-CAM XLT control unit comes equipped with a state-of the art solid state DVR that records survey footage to either 16GB of internal storage, or to an expandable USB flash drive. Survey footage is exported natively in an .mp4 format, meaning the footage will play on all major PC operating systems without the need for file conversion. All DVR recording and playback functions can be controlled by the included mini-Bluetooth keyboard, including adding text details of your well survey to your recording. The R-CAM XLT also features a built in microphone recorder. Now, adding voiceover commentary to your recordings is as simple as pushing a button.

One of the most necessary elements to conducting a successful downhole survey is the ability to increase and decrease the cameras lighting on demand. With this in mind, we have engineered the R-CAM XLT to include side view and down view LED’s with five stages of adjustable lighting, ensuring that you receive the optimum amount of light with simply a click of a button.

The inclusion of new, more efficient LED’s has increased the side-view light output of the R-CAM XLT by nearly 5 times, while down-view light output has increased nearly 3 times. In certain situations, too much light can be a hindrance rather than an asset. The R-CAM XLT features two low light settings designed to allow you to select the perfect level of illumination in any condition. LEDs are shock proof, and long lasting, providing approximately 5,000 hours of use.

The video output from the camera duplexes with the control signals and power, going down to the camera, on a single conductor armored, Kevlar reinforced, coaxial cable. The camera is operable only with the R-Cam control unit supplied with the system and is not compatible with other types of closed circuit survey systems.

A single coaxial cable head connector on the rear of the camera is connected to the cable by a watertight pressure rated connector. The R-Cam control unit provides all the controls to operate the camera and reel assembly, and is equipped with a 9-inch LCD color video monitor/DVR Combo is also provided to view and record the survey.

A 12 VDC rechargeable gel cell battery pack is used to power the system and video recorder, making the entire system completely portable. The battery pack will provide approximately 4-5 hours of operation depending on the amount of video recording and/or reel usage. 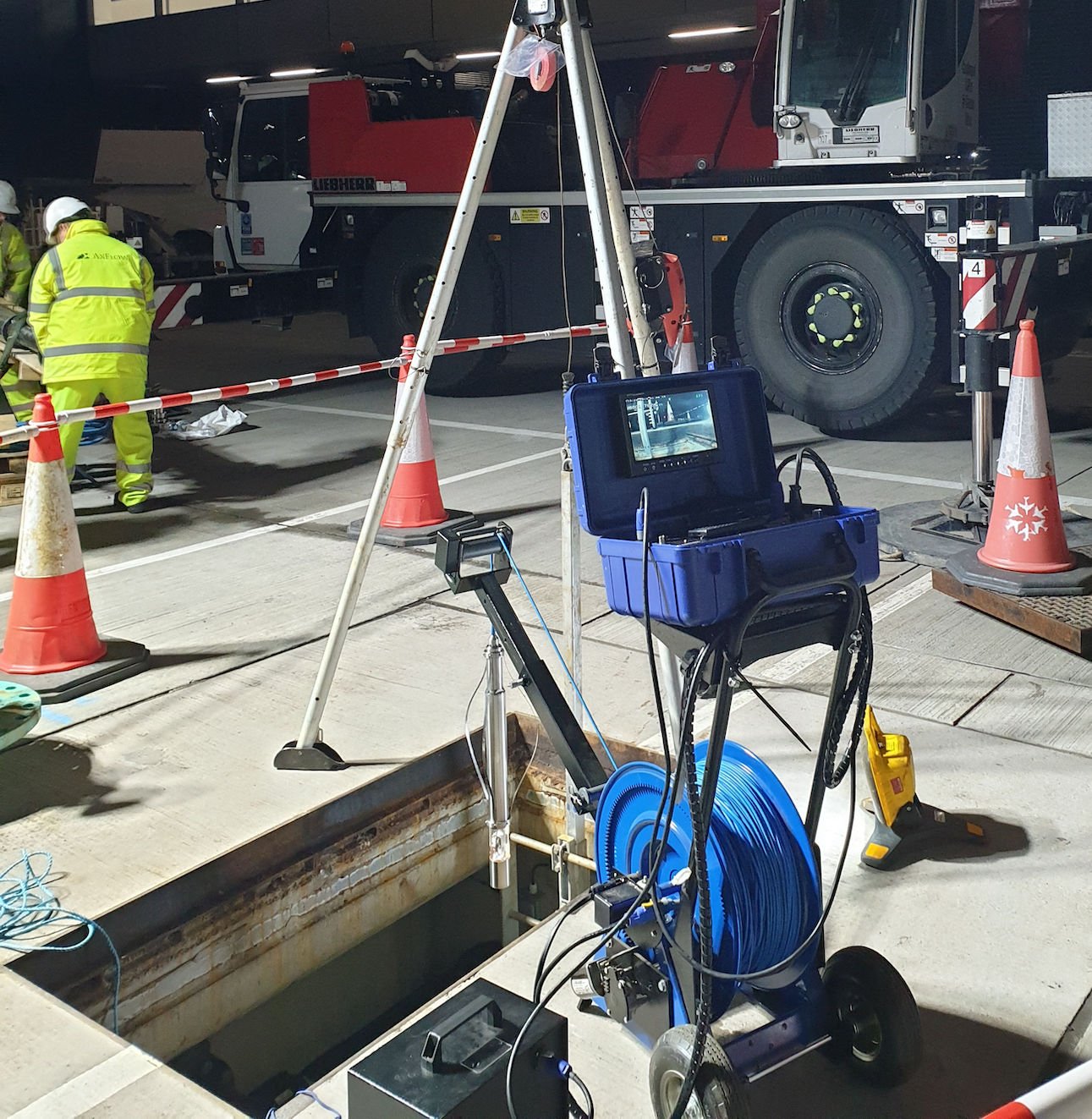 Display the Quality of Work and Offer Customer

The camera is excellent and it makes a night and day difference in our business.

I used to borrow a friendly competitor’s camera.  He had a small one with a hand reel and a tripod made of PVC.  It worked for me at times, but the R-cam 1000 is heads and shoulders above that.

I hoped we would use our new R-CAM 1000 at least 1 time per month... but we're averaging closer to 10. Plus, I don't have to subcontract the work out to my competition anymore, and I'm picking up a bunch of additional well rehab work.

What size boreholes can the camera view?

Do I need a dedicated side-view camera
Some manufacturers will claim that a wide-angle down-view lens can provide just as much viewing area as a dedicated side-view camera module. This is simply not the case. To achieve the clearest, most detailed view of the side of the borehole you will need a dedicated side-view camera. The R-CAM dual view camera and DC5150 come equipped with 360-degree side-view and dedicated down-view cameras.
How much cable do I need?
When you view the system as a whole, the cable is one of the least expensive components at the time of purchase, yet one of the most difficult to upgrade at a later time. Our recommendation is to equip your system with more cable than you initially think you’ll need. A camera system will be in service for many years, and while you may only survey wells that are 500 ft. today, in seven years you may be surveying wells that are 600-700 ft. deep. Additionally, the cable will be removed periodically when replacing the cable head as a part of normal maintenance. Having additional cable is a great way to future-proof your system and ensure your peace of mind.
Do I need a recording device for my camera?
While a real-time video survey is preferable to having no down-hole data at all, the real value of a down-hole survey is the video data is generated and can be analyzed and reviewed at a later time. With this in mind, nearly all of our systems come equipped with state-of-the-art DVR’s that easily capture and store your video data. These videos are stored on an included 16 GB thumb drive for easy sharing with customers.
How important is an on-screen depth counter?
Having your depth displayed on-screen in real-time is a critical data point when conducting an underground survey. Without your depth count on screen, it is very easy to become disoriented down-hole and miss critical bits of information, like a break in the well casing. Nearly all of our down-hole camera systems are equipped with a highly accurate digital encoder, ensuring you know the exact depth of your camera while conducting a survey.
What type of maintenance does the camera system require?

Every camera system will eventually require a repair to the cable head, the point at which the cable and camera physically connect. Over time, the internal connections within the cable head can be strained to the point where they disconnect and cause interference or a complete loss of the video signal. To expedite the repair process, we have cable head repair kits available for both portable systems and large vehicle-based systems.

Conducting surveys with the included centralizers and available lens shield accessory is the best way to ensure that the camera head remains protected downhole. When not in use, store the camera head in an area where it will be safe from unintentional drops or damage. If your camera system is damaged, we offer full repair services at our headquarters in Fresno, California.